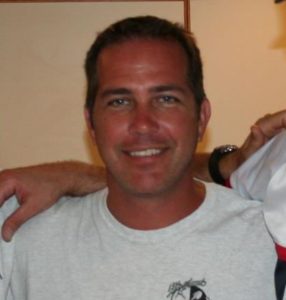 I’ve been friends with Ron ever since our days pledging TKE with Pete Ferrari, Perry Ill, Rich Larkin, and Rich Hughes in 1985. I was stunned by the news of his passing and I had no words.  It was like a bolt out of the blue, and I had difficulty processing it. While reflecting on my friendship with Ron I recalled an experience that I think goes to the heart of why he was such a great friend and person.

By my last semester at Keene I had completed all the courses I needed for my degree in Safety, and was looking for some “easy credits”.  Ron suggested I take a geology course with him.  Problem was it was a 400 level course in structural geology. I had thrown plenty of rocks in my life, but never studied them (Ron was the Geology Major) so I was hesitant to take it. He told me not to worry as he would get me through it, and we would have a blast.  It didn’t take long for me to realize I had “rocks” in my head for agreeing to take this class.  I was in way too deep, and had no clue what was going on most of the time.

Besides the book work, we also had to map Robinhood Park which was a major project. Our problem was we could not help but become hopelessly distracted from what we were supposed to be doing, and would end up just laughing, hanging out, and doing less than scholarly things. Needless to say, while Ron was known as a serious student within the Fraternity we definitely were not the star students in this particular class.  I am convinced that Ron could have been if he didn’t have my ineptitude weighing him down like a granite outcropping. It didn’t seem to matter to him though, and true to his word he got me through it and we had a blast!

That experience showed me how much he valued friendship, and that is why he was loved by so many.  I am thankful for the great times I had with him, and can’t help but smile and laugh when I think about them.  I know Ron touched many lives in the same way. I’ll miss his infectious laugh, his giant smile, and most of all his great friendship.